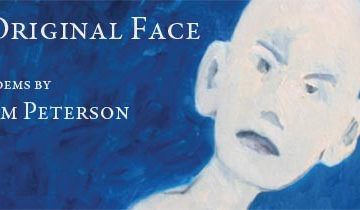 In an attempt to solve the mysterious Zen koan—“What is your original face before your mother and father were born?”—the poems in Original Face explore many permutations of the relationship between men and women, between the male and female energies.  Can a homeless man find a new chance in the apartment of a tattooed barmaid?  Can a woman overcome the heaviness of her father’s abuse by wearing his captain’s mask?  How does a woman live with the death of her son in a hunting accident?  How does a man deal with the dullness of his life after the death of his beloved wife?  What does an old man do when a strange face appears in his room and leads him to an encounter with a mysterious old woman?  Peterson’s poems examine these and many other situations in the lives that men and women share; and if it’s true that words can’t solve a koan, these tightly-wound poems travel a long distance down the ancient path toward that ultimate silence.

The poems in Original Face are exceptional in their ability to uncover a secret life, to call forth a hidden magic in the objects, relationships, and events of our everyday world. These poems are wise, energetic, sweeping. Jim Peterson is a seeker of significance, and this book teaches as well as delights.

From the paintings in Goya’s The Disparates to the mind of a divorced office worker brooding in his empty home, the poems in Original Face move one from the empirical, explicable world into the mysteries of deep consciousness. With a musician’s ear, shaman’s inner-eye, and sometimes a standup’s wit, Jim Peterson accomplishes what Joseph Conrad described as the writer’s task: “to make you hear, to make you feel, [and], before all, to make you see.”